ERBIL, Kurdistan Region – A family discovered what they believe is a mass grave containing the bodies of four elderly relatives in the Shingal area this week. The remains had been burned. At least 10 mass graves in the area have been set on fire by unknown arsonists, according to local officials.

The mass grave was discovered in the Gir Ozer subdistrict near Shingal. The four buried in the grave are believed to be three women and one man, aged between 60 and 80 years, according to family members of the deceased.

Family members living in Snuny, north of Mount Shingal were told on Thursday that their family home in Gir Ozer had burned. The family visited the village on Saturday where they say the front yard of the home had been burned. In the yard, they found scarred skeletal remains. It appeared that the bodies had been dug up and then set on fire.

Seeing the carnage in their home, the family believed they finally knew what happened to elderly relatives who were missing since the Islamic State (ISIS) swept into the area.

“The four had opted to stay during the Daesh [ISIS] attack. We asked them to come with us. When ISIS arrived in this area, we did not manage to get them out of the house,” said Ghanim Qasim, a relative of one of the four.

In the summer of 2014, ISIS extremists swept across swathes of Syria and Iraq. In August that year, they attacked the Yezidi homeland of Shingal, committing genocide against the ethno-religious minority. Hundreds of thousands of Yezidis fled from the militants, but not everyone escaped. Thousands were killed or and 6,417 were captured. As of this month, 3,530 Yezidis have been rescued or escaped ISIS clutches, and 2,887 are still missing, according to the Kurdistan Regional Government’s office documenting the genocide. 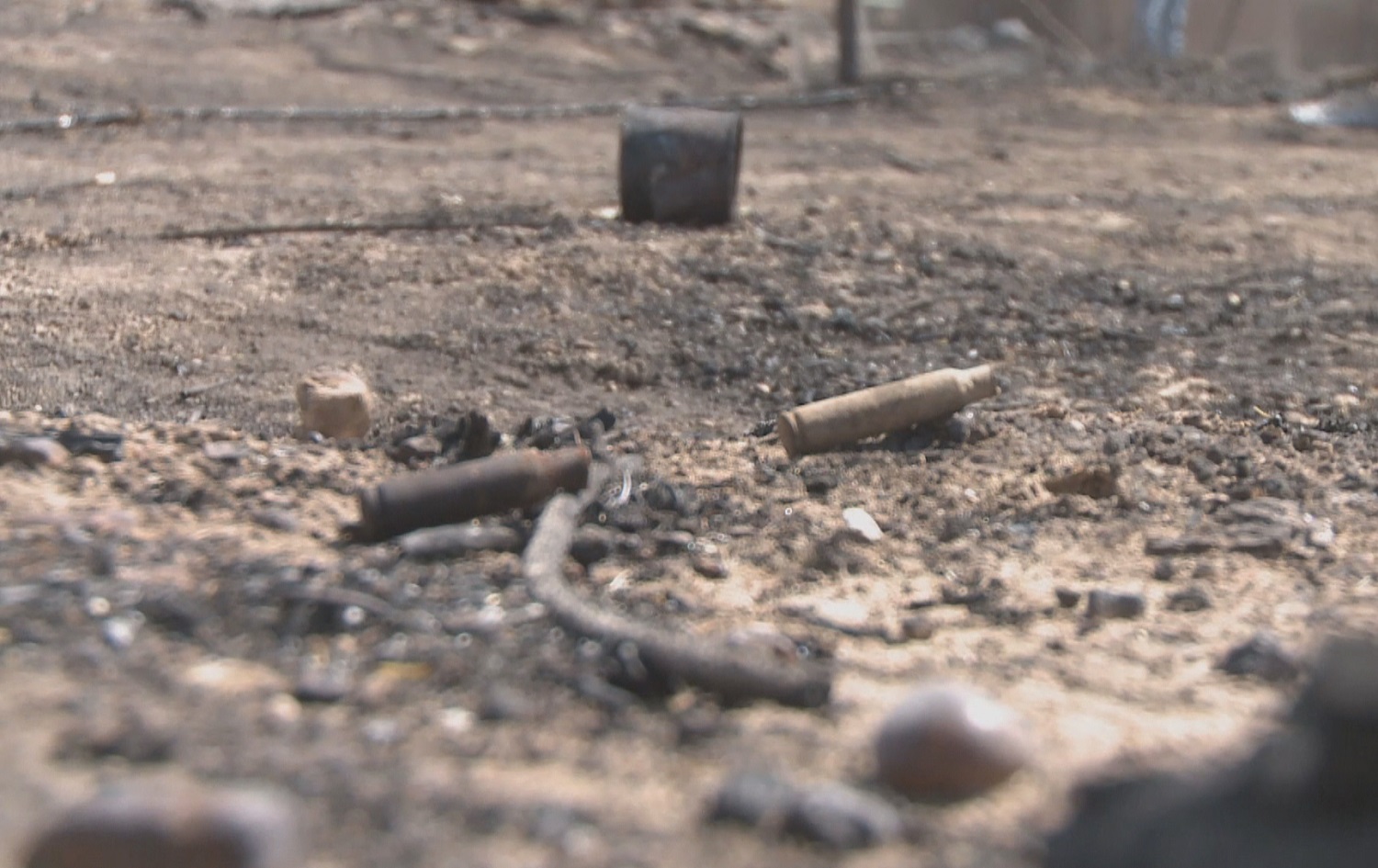 Spent cartridges are seen on the ground where family members discovered charred remains in the yard of their family home in Gir Ozer. Photo: Rudaw

The grave “contains my uncle and my uncle’s wife,” Hassan Khidir told Rudaw on Saturday. He was searching for his relatives for six years. “We are collecting them [the remains]. We cannot do anything.”

To date, 82 mass graves have been discovered in addition to dozens of individual graves, containing the remains of more than 1,000 Yezidis, according to KRG figures that have been confirmed by the United Nations. Only a handful of sites have been exhumed, with work hindered by ongoing insecurity in the area that is disputed between the governments of Erbil and Baghdad and currently controlled by a patchwork of armed groups.

Local authorities say as many as 10 mass graves have been burned since last year, but they don’t know who is responsible.

Jalal Khalo, mayor of Gir Ozer subdistrict, and an official with the armed Sinjar Resistance Units (YBS) who control the village, both told Rudaw they do not know who carried out the arson.

Fahad Hamid, mayor of Shingal, told Rudaw on Sunday that they “suspect Daesh [ISIS] supporters to be behind the burning of the mass graves.”

“We cannot identify those committing such acts. They are usually doing it during the night, and especially during the summer,” Hamid added.

Judge Ayman Mostafa, the investigating judge of the KRG’s Commission of Investigation and Gathering Evidence (CIGE) tasked with investigating ISIS crimes, told Rudaw they are aware of the problem, “but we cannot do anything to go and document them because of the coronavirus measures.”

Movement between provinces and districts is prohibited under lockdown rules imposed to limit spread of the highly contagious COVID-19.

HAWRAMAN, Kurdistan Region — It had snowed in the highlands of Mariwan, western Iran for three consecutive...

RT @KRG_USA: PRESS RELEASE: Minister @SafeenDizayee, Head of @KRG_DFR, spoke on Friday in a panel discussion about the fate of the Kurds in…

"Erbil and Sulaimani international airports are currently not ready for international flights due to lack of measur… https://t.co/Y550OfuyCC