When people ask me my favorite places on Earth, typically I respond like this: the best food is in Ethiopia, the best historical sites are in India, but the best people are in Kurdistan. For that reason, I have been pulled back to Kurdistan as a photographer again and again.

This article features some of my most recent work from the region since the publication of my book We Came From Fire: Kurdistan’s Armed Struggle Against ISIS.

We finally finished our documentary about my photography exhibition in Iraqi Kurdistan. This film highlights the struggle we had opening it and the ongoing crisis in Rojava. Amnasuraka, or, “the Red Prison” was a Saddam-era jail infamous for the incarceration and torture of Kurdish and Iraqi civilians. It was converted into a museum, and we displayed my portraits of Kurdish heroes on those same walls.

It wasn’t easy to do last minute. In the 18-minute documentary above, you’ll see how we almost didn’t make it in time, but somehow managed to pull it off thanks to Metrography Agency, Peyk Bookstore, Vim, and our local volunteers who barely got any sleep.

​​​​​​​All proceeds from the print sales and a workshop hosted for local photographers were donated to Heyva Sor a Kurdistanê. This is an NGO that works on the frontlines helping those displaced by the Turkish invasion of Syria. These are brave aid workers who have been targeted and killed, yet continue their brave work in Rojava and beyond. The COVID-19 pandemic is hitting everywhere, especially areas in Kurdistan now under complete lockdown since we filmed the documentary. Please consider donating to Heyva Sor a Kurdistanê to help extremely vulnerable refugee communities seeking peace in Kurdistan. 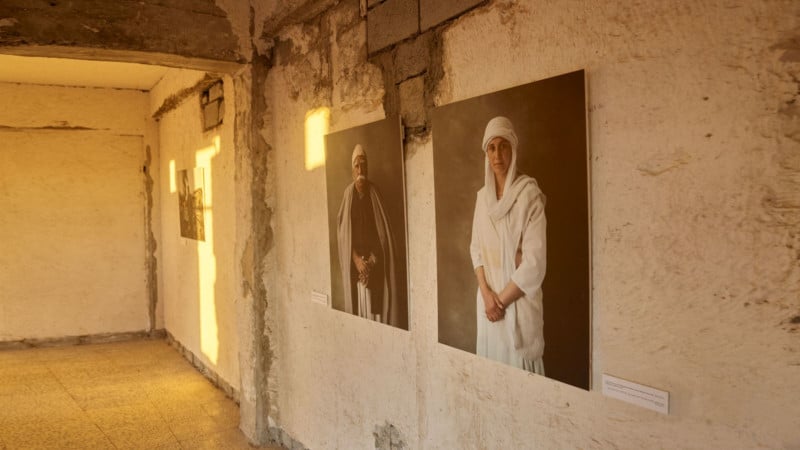 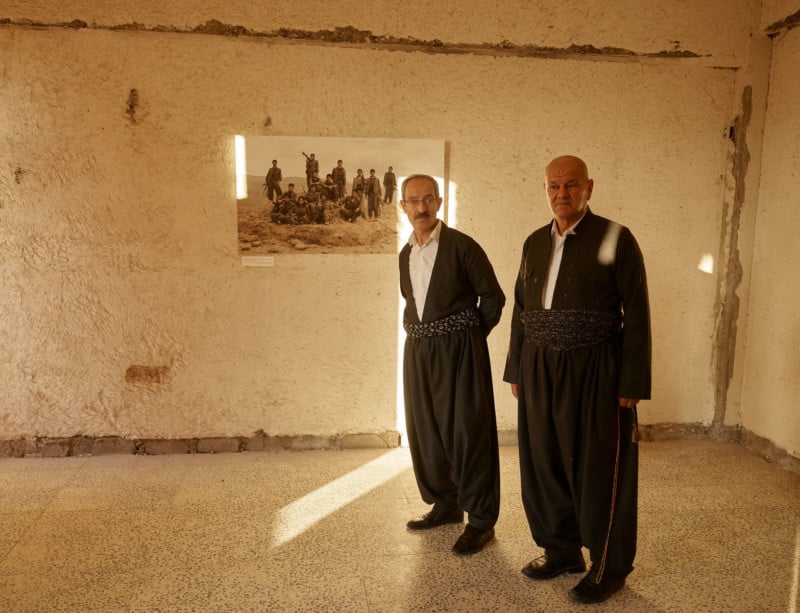 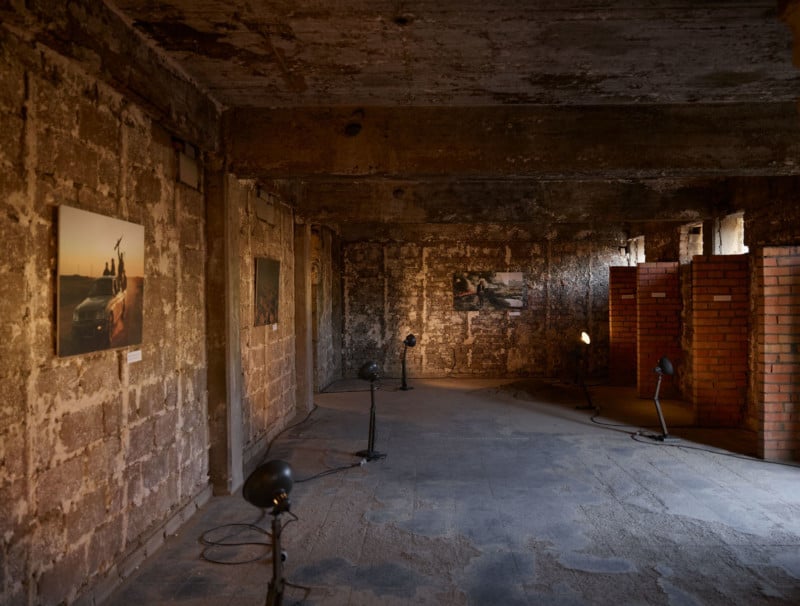 Once the exhibition was installed at Amna Suraka, I had time to travel North and see and photograph the ongoing situation for myself. In Iraqi Kurdistan’s Bardarash Camp, tents that once housed civilians fleeing ISIS now shelter refugees fleeing the Turkish invasion of Kurdish regions of Northern Syria.

After American President Donald Trump’s sudden order for the US military to withdraw from Syria, clashes erupted between the once American-backed Syrian Democratic Forces and the Turkish Army alongside their rebel proxies. The invasion has plunged what was once the most stable region of war-torn Syria into a new crisis. Civilians from Syrian Kurdistan have fled their homes for safety across the border in Iraqi Kurdistan. What the displaced feared most was ethnic cleansing at the hands of Turkish-backed rebel groups. 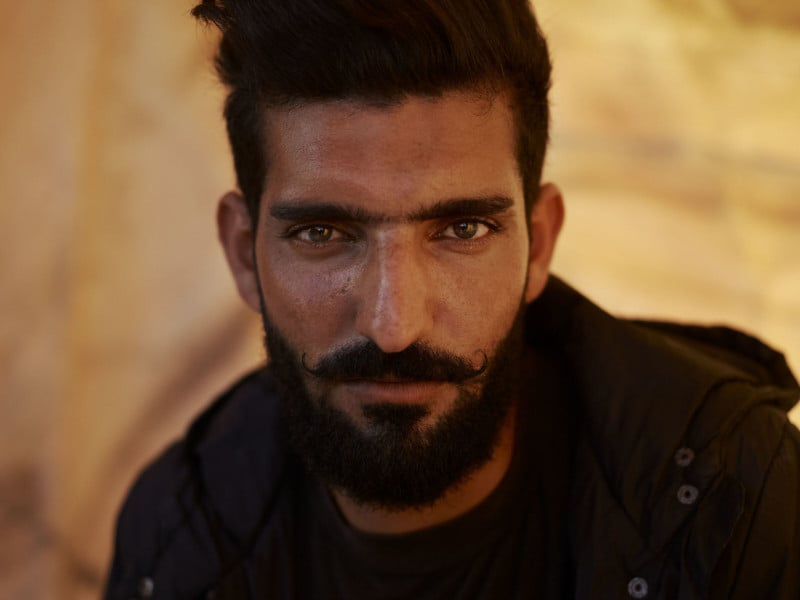 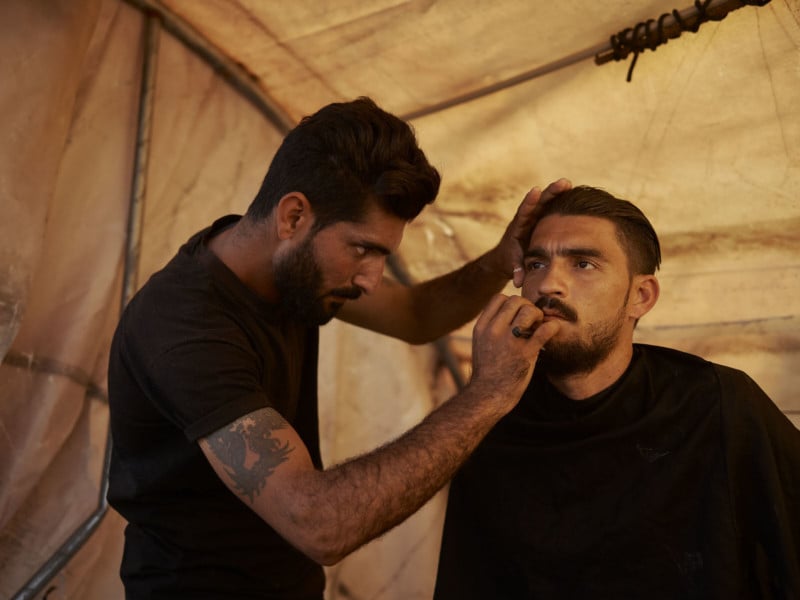 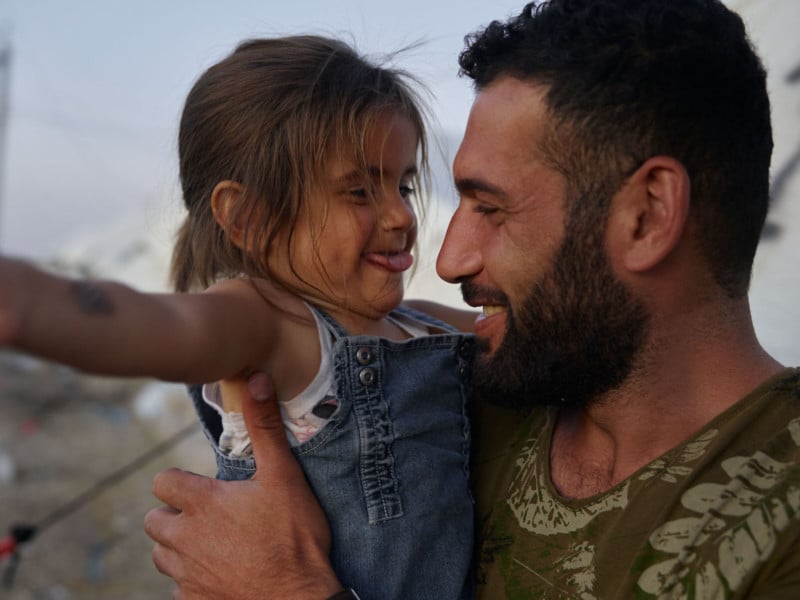 A visit to Kurdistan is never complete without a visit to the mountains. I had always wanted to visit Hawraman — a peaceful, mountainous region nestled between the borders of Iraqi and Iranian Kurdistan. A smuggler bringing goods between these nation-state borders may tell you that he is doing nothing illegal since both sides are technically Kurdistan. The Iranian border guards waiting in towers across the rocky plateaus think otherwise and typically shoot at any unauthorized crossing.

Regimes come and go, but it seems Hawraman will always be Hawaraman, a distinct heartbeat of Kurdish culture known for its layered villages built right into rocky hillsides and mountain ranges. Mosques share the same mountain air as temples of pre-Abrahamic religions, such as the Yarsan faith. In the little city centers connecting the villages, smokey cafes serve breakfasts of local mountain honey, walnuts, and pomegranates. Our journey back ended back in Slemani to photograph acclaimed Kurdish artist Ismail Khayat at his home studio. Ismail’s works have been exhibited around the world, including Paris, Japan, New York, and London, but he remains a very humble guy. I photographed his portrait in front of one of his dynamic paintings, but I made the session short due to his health. Ismail was kind enough to gift me one of his five thousand stones painted with human figures, birds, and fishes. Each stone represents the 5,000 victims of Halabja chemical attack, a massacre against the Kurdish people that took place on March 16, 1988.

I was able to photograph and travel freely around all thanks to Ahmed Najm from Metrography organizing the permissions, and an incredible amount of local support. Unfortunately, due to the devastating outbreak of COVID-19 and lockdowns spread across the general region, moving around and photographing this area would now be nearly impossible. The Kurds even stayed indoors during Newroz, their largest celebration of the Spring Equinox. If history teaches us anything, it will be that things will eventually go back to normal, and the Kurds will remain, defiant as ever. I am looking forward to my next trip to Kurdistan. 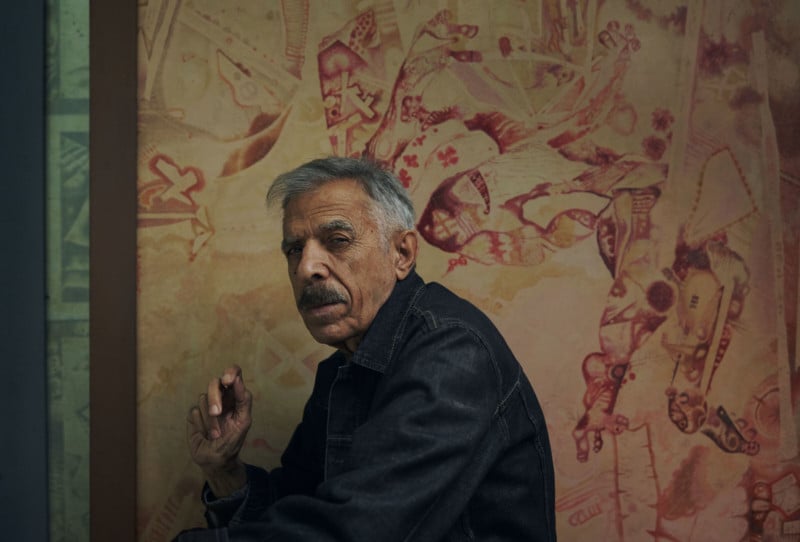 I would like to thank the following people for helping this project come together:

About the author: Joey L. is a Canadian-born photographer and director based in Brooklyn, New York. Since the age of 18, Joey’s work has been consistently sought out by a number of prominent advertising clients, including the National Geographic Channel, U.S. Army, Lavazza for their 2016 calendar, Canon, Summit Entertainment, and many others. You can find more of his work on his website, Instagram, Twitter, and Facebook. Joey’s lighting and Photoshop tutorials can be viewed at LearnFromJoeyL.com.

The New York Review of Books: How Turkey’s Campaign in Afrin Is Stoking Syrian Hatreds

Mohammed is not his real name. He asked me not to share personal details, fearing retaliation from...

HAWRAMAN, Kurdistan Region — It had snowed in the highlands of Mariwan, western Iran for three consecutive...

“As intellectuals, academics, jurists, politicians, writers, artists, democrats and patriots from all Kurdistan we… https://t.co/GcnXk8nQHX

"The #US-led coalition against #ISIS, in coordination with #Kurdish #Peshmerga forces, carried out airstrikes on We… https://t.co/7iggCNE241

“Two months before, in #Rojava . I just learnt that Turkish proxies cut off water in Hasaka, further on road to Mosul. It means 460,000 people, including refugees, with no water to wash hands and to prevent #Coronavirus . Pure disaster. #covid_19 #rojava #peshmerga #hasake “

For the first time, #Newroz was celebrated without the large joyful crowds, without dancing and singing around the Newroz fire due to the coronavirus pandemic. Justice for Kurds wishes all around the world a healthy and warm #Newroz.

Yesterday, @caroline_fourest was presenting her movie ‘Sisters in Arms’ (@sistersinarmsthemovie )at @yale University during the conference ‘The #Kurds in crisis’ in partnership with The Jackson Institute and @justiceforkurds